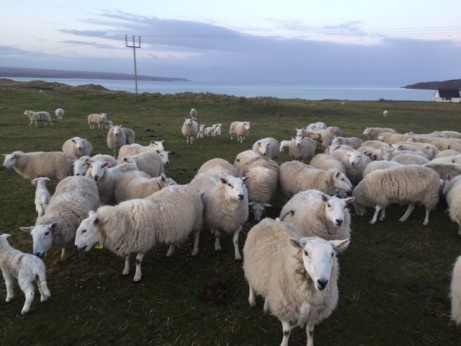 I was on the early shift this morning.  It was a good morning and as always the sheep where keen to be fed. I spotted a new lamb hidden round the cattle feeders which wasn’t on its feet but given all the sheep surrounding me I decided to check it on my way out of the field.

There were a few new born lambs on the field, including a set of twins. All were on their feet and looking fit and healthy – phew!

A ewe was looking a little restless and had started pushing but on closer inspection I couldn’t see anything showing so decided to leave her and check later rather than cause too much stress too early on.

The little lamb I previously spotted I stopped to check. As I got closer, it looked to be shivering and a little hunched up – oh no, I thought! I realised that the water bag was still over its head. Thankfully it was clear over its nose and its mouth, if it wasn’t it would have suffocated. Anyway, I cleared the water bag from its head and the little lamb instantly shook its head and sat up! As I walked away it was attempting to stand!

After breakfast Dad, Aila and I all went out. Not long in the field and we were alerted to a ewe lambing, the lambs head was out and had started choking. We caught her, there was one leg backwards, I managed to pull the lamb out with one leg. Thankfully we caught her just in time as any later and this little (or actually quite big) lamb would be dead. I swung the lamb a couple times just to ensure we had cleared the mucus to allow the lamb to breath. 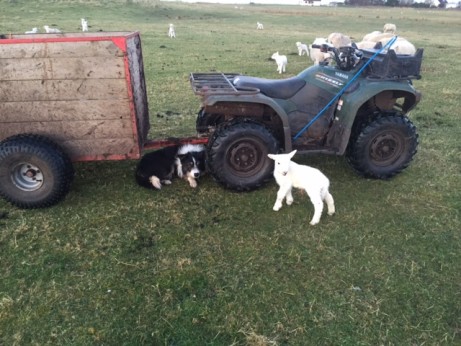 We continued to mark a few more lambs – tag them, dock their tails to stop them getting dirty from sheep poo and attracting maggots. If the tails are kept shorter then, by rights, should be kept cleaner. We also weighed them and if it is a male we castrate them (unless we think it worthwhile keeping to breed with in the future). All this information is written down so we have a record of it.

Another ewe was lambing which we caught and lambed. We had left the ewe a little while to see if there would be any progress but there wasn’t. It was another big lamb which the ewe would have struggled to push out herself.

The afternoon was quiet, a couple more new lambs which lambed themselves, this is what we want!