This Farming Wife: From West to East!

Due to the surprising popularity of the lambing blog it was suggested that I keep going with this ‘blogging’ malarkey!

I have to say, I wasn’t too sure, I didn’t think there would be enough, exciting or interesting, stuff to capture folks imagination. Anyway, where to start on “This Farming Wife’s” daily life? I guess the beginning!

I’m a west coaster born and bred and very proud of my west coast routes. I was brought up on a fairly big caravan and campsite so from a young age was used to dealing with the public and really enjoyed it. Adjacent to the site we had a hill sheep farm. Although working in the shop and reception on the site, I always had a keen interest on any sheep task needing done so often managed to wangle days off to help with shearing, dipping, lamb sales and of course lambing.

I studied Rural Resource Management at the Scottish Agricultural College. My hope was always to return to Gairloch to take on the family business or develop a new venture on our family’s crofting estate (no mean feat but I relished the challenge!)

I met Jock in Inverness whilst I worked for the Crofting Commission, we later met at the Royal Highland Show, an annual outing for many with any agricultural interest.

Just over a year later we got engaged and married in September 2011 and my hopes and dreams of taking on or developing the family business out west had to take a bit of side step as we lived in the east!

We lived in Findhorn with Jock running the family butcher shop Macbeth’s, in Forres, alongside his Mum and Dad. 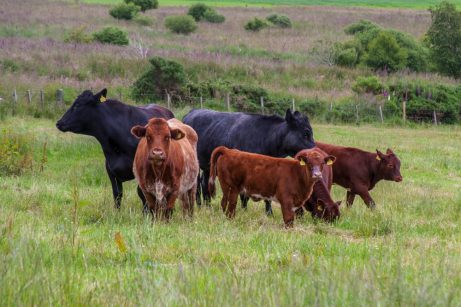 Jock’s parents ran the farm, Edinvale near Dallas, where Jock and his sister Bridget were brought up.  Jock was often heard saying that his Dad dealt with the live department and he the dead!

I continued working in Inverness for the commission until our eldest daughter Aila (4) came along.

After maternity leave I decided that I needed a change in career and was lucky to get a job with the Scottish Association of Young Farmers Clubs as the Highland event manager. I really enjoyed the job and getting out and about meeting young enthusiastic folk who all shared the same interest in agriculture as I do.

I met so many lovely folk during my time in this position that it confirmed to me that farming folk are generally pretty friendly folk.

Sadly just before our second daughter Tilly (18 months) arrived, Jock’s Mum lost her battle with cancer. Not only did Jock have the emotional loss of losing his Mum he also lost a trusted partner and confidant in Macbeth’s. It was a big blow.

We moved house to Dyke and everything was going more or less okay. However, we were dealt a second blow, when less than a year later Jock’s Dad died suddenly. It was such an awful time not only emotionally but all of a sudden Jock was responsible for not only the butcher shop but the farm up at Edinvale too.

Farms don’t stop running, the week Jock’s Dad died a cow developed mastitis, this was the last thing we needed in the midst of all the funeral arrangements.

It soon became apparent that we would have to make a decision pretty quickly whether we moved up to the farm. Jock was obviously keen to try and keep the family farm going. I was torn, as I knew that moving up to the farm pushed my dreams of living on the west further away but equally I didn’t want to take this bittersweet opportunity away from Jock and us as a family.

We moved to the farm in October 2015 – just four months after Jock’s dad passed away. It has been a really tough few months adjusting to life on the farm that we should never have been on for at least another 20 years. 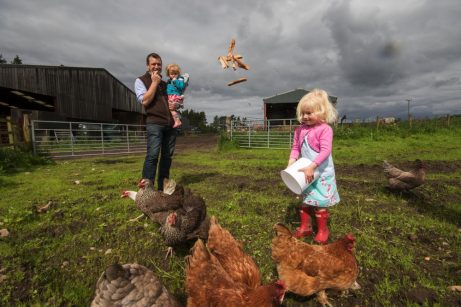 We are very fortunate to have Johnnie working with us there, we wouldn’t have got through the past few months without him. It gives Jock a bit more time to concentrate on trying to understand and sort out the various family enterprises.

The farm is great and the girls love being able to pop out to watch a calf been born, feed the chickens and collect eggs and I do feel exceptionally privileged that our girls can experience all this on our door step.