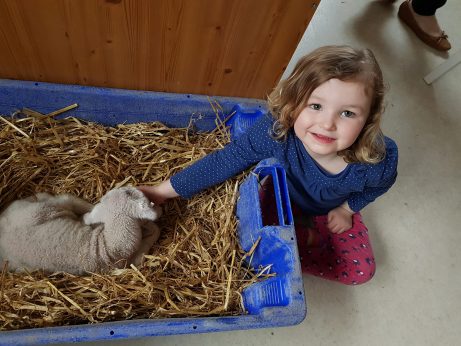 Tilly making friends with the lamb

All was well on Sunday morning, 3 new lambs were born, a single and a set of twins. Dad was on the early morning shift with Amber, Abbie and Aila so plenty hands to help sort them all out.

I went down with the team, minus Dad.  All was well but the pens were full so we needed to free some up. All the lambs in the pens were well fed and bright so we marked them and Amber put them out. Once the pens were emptied we cleaned them out and put fresh bedding of straw in to try and reduce any risk of infection. It is nice to see the new lambs go out and the shed ready for the next batch of lambs to arrive. The remainder of the day was quiet with very little activity.

All our helpers left us in the afternoon, we were sad to see them go but Aila and Abbie had school to go to and Amber had work.  Amber was a great help and seems to have picked up the lambing bug!

Dad had agreed to do the Monday early morning shift, it was the busiest morning yet! He had 2 ewes that had lambed and 2 ewes lambing. He had to lamb both ewes as they were big lambs, one had started to choke and Dad had to work on it for near 5 minutes to get it breathing again but he did and all was fine. We had pen shortages so Dad had to leave one of the lambs in the big pen until we had sorted everything out.

Tilly and I went down a little later in the morning and Rhea came along to help put some lambs out. On getting to the shed there was another new lamb in the big pen. We had to sort out the smaller pens first so I marked the lambs and loaded them up in the quad trailer and Rhea took them across the river. 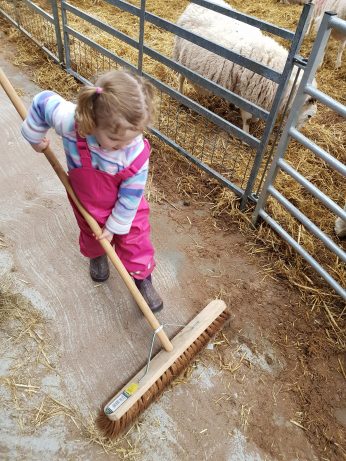 I managed to get the first ewe and lamb out relatively easy, the ewe followed her lamb so I didn’t have to attempt to catch her. Dad turned up when I was ready for the second ewe and lamb so he guided the ewe and lamb out. All sorted and we had 2 free small pens!

After lunch Rory (in a carrier) and I had a walk round the field with all the lambs to check all were well. In particular I was looking for a set of twins belonging to ewe 81. I had asked Alisha to go out and feed the smaller of the 2 lambs the night before as I spotted him and wasn’t too happy with how he was looking. I saw a wee lamb hunkered down and as we got closer to it there were no ewes looking back for it. The wee lamb didn’t get up, not a good sign. I picked the lamb up and put my finger in his mouth. The poor wee lamb was cold and wet through. It was ewe 81’s lamb. It’s not uncommon for the weaker twin to be left behind and with the wet weather the wee lamb would have got weaker and weaker and then the cold would have set in. Rhea had joined us by this time and we took the lamb and put it into my sister Morag’s kitchen (she was in Inverness!) in a box full of straw and Rhea got a hairdryer to warm the wee lamb up. Tilly was delighted to find a wee lamb in her Auntie Morags kitchen, Auntie Morag….not so much!

On returning to the shed to get the straw I spotted a ewe lambing. I left her as we got the wee lamb sorted out hoping that she may have lambed. When I went back to check she still hadn’t lambed so we took her out and lambed her. Another big lamb that was a bit tight to get out. Dad was back so we decided to go across the river and try and find ewe 81 to take her back so we could reunite the wee lamb back to its mother once it had warmed up.

Im not so well practised at catching a ewe with a lamb. You can generally get pretty close to a ewe whilst holding on to its lamb. It’s a bit of a knack to hold the lamb and quickly hook the ewe in your stick. You only get once chance and if you don’t get her first time you have to try something else. I was holding the lamb, the rain pounding on my back and wet hands attempting to hook this ewe, I went for it and missed. Aaargh. So next attempt was to create a corner with the landrover and drive her into the corner. Second, or third, or fourth attempt was much more successful and we got her. The lamb took off and off I went to catch it, first attempt saw me land flat out on the grass I got him second time though. We took them into the shed. We left the wee lamb under the watchful care of Rhea and Alisha. It was warming up and we managed to get a wee drop milk into it so all good signs.

All the lambing pens in the shed are full and we are on overspill as a set of twins were born tonight. The wee lamb was back on its feet and left a puddle on Auntie Morags floor before Alisha returned it to its mother.