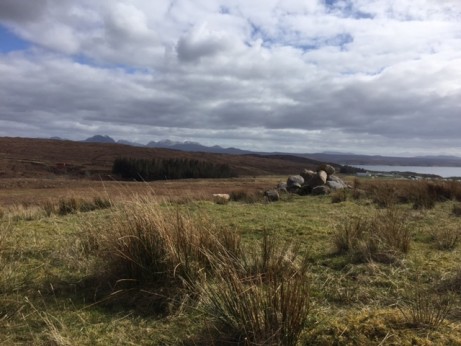 Dad was on the early shift this morning, he had to lamb two ewes. There was another set of twins and a few more singles. All were fine, apart from one which seemed to struggle to stand. Dad helped it up and decided to check it later.

Aila and I went round after breakfast, we noticed a ewe lambing but nothing showing so we left her until we finished checking the rest and marking some lambs. Whilst marking we noticed another ewe lambing, she seemed a little restless and given the high number of difficult births so far decided to lamb her. All was fine.

I spotted a third ewe lambing. I didn’t think she was to far on so decided to leave her while I checked the lamb that couldn’t stand this morning. I found the lamb, which I got to stand and it had a good stretch which is an indicator that the lamb has fed. The lamb seemed fine, however, there was a second ewe trying to get in on the action and steal this lamb from its mother. Sometimes when ewes are close to lambing they think they should already have a lamb so try and steal another – to prevent any confusion we took her in to the fank. (pen)

I went to do a quick check of the two ewes lambing and was surprised (but pleased) to find the one which I didn’t think was far on, had lambed! I completely misjudged that one! The first ewe which I had spotted was however still lambing with still nothing showing. I had another couple jobs to do so left her.

On return to the field, she still hadnt lambed, so I caught her, she was a fiesty ewe which went for the dog as I was trying to catch her. Everything was coming the right way, it was a big lamb though and pretty tight so worthwhile assisting.

The afternoon round was quiet, it was wet so not the most pleasant sheep round. I managed to mark a few lambs, including the set of twins which for less than 24 hours old where very fast and pretty nifty with their moves to avoid me!

We have had a busy few days on the lambing field, I havent known such a busy time having to assist ewes to lamb. The reason for assisting has either been legs back or just big lambs. This could be caused from too much feeding or genetics. The lambs however are bonnie with bright and alert faces.