After a year off last year to have our 3rd child Rory, I’m back West for another lambing season. I’m not sure quite what the draw is but I do enjoy helping Dad at lambing and if it means Dad is able to keep the sheep for a couple of more years it makes it all the more worthwhile. It is also great learning for me should we ever have our own breeding flock at Edinvale……watch this space! 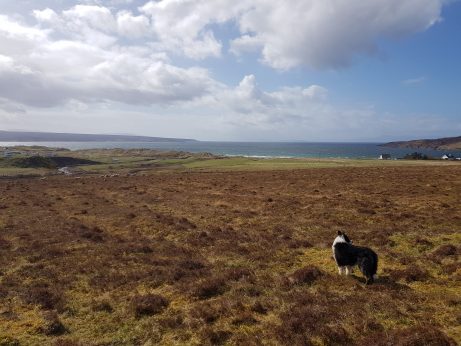 Lambing was officially meant to start today, Monday, however there are always a few early ones, 10 to be exact! Dads flock of 150 cheviot ewes spend most their time on the hill and really only taken in-bye for lambing. Dad took them in last week to allow us to mark all the ewes with a number (or smiley face, dot, or target!) so they are easily identifiable from a distance and we can easy match up ewes and lambs. After an hour of marking the ewes I was fairly battered and bruised so who knows how the next couple of weeks is going to go!

I have very keen nieces who suggested we go out round the sheep at the weekend. We had an early ewe and lamb to go out so I reluctantly went out with them, not expecting to be doing anything! Not long in I noticed 2 ewes in the distance with what looked like a wee lamb in the middle. Something wasn’t right so we went over to investigate. A ewe had had a healthy set of twins and the second ewe was trying to steal one. She was lambing, the head was out and only one leg, there should be 2 showing! Great, I thought, we have no dog and this ewe will need lambed. So my niece went back to find a dog while my other niece and I attempted to catch the sheep. We attempted to walk her up to a fence and catch her this way but I was obviously out of practise! I eventually caught her, not at a fence, and pulled the lamb out. I was glad we did as if we had left it much longer the lamb would have been dead. The lamb was a little slow to get going but with a couple of swings and rub she shook her head. The ewe however did not show much interest in the lamb. I rubbed her nose over the lamb and she eventually started to lick it. She was in an enclosed area so I thought if we shut the gate and leave them be the ewe would accept the lamb.

Unfortunately my plan was flawed as what I hadn’t realised was there was a rather large hole in the fence. The ewe had left its own lamb and went back to the set of twins it was trying to steal! At least this time I had a dog and after running, quite far, eventually caught her, again. We took her and the lamb into the fank where we left them in a small area to give the ewe and lamb time to bond with no other distractions. They are doing fine. 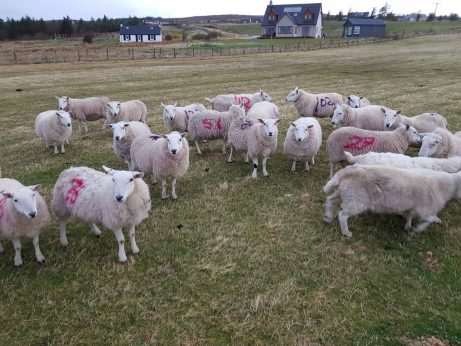 We had a similar situation in the afternoon, I was called out by my nieces to another ewe lambing. The head and one leg were out. This time I was prepared with a dog and we caught her fairly swiftly. My niece pulled the lamb out and we revived the lamb as we did earlier. The ewe ran off as soon as we got up. This time though we slowly pushed her back in the direction to where her lamb was and she eventually found it and have been fine since.

The last couple of days have ben quieter, the ewes have lambed themselves and the lambs have been fine. We have taken a bottle out to supplement a couple lambs who’s Mothers haven’t quite got enough milk and marked the 10 lambs to date.

This is officially day 1!