Dad did the early shift this morning, all was well, despite it being a wet and windy morning. There were a couple of new lambs that were up and had that first drink of milk so were ready to conquer the world.

I went out late morning. Aila decided to come with me, we decided to take the quad bike! Five minutes into the field and I managed to bog it, again, this time well and truly bogged! Whilst trying to push the quad out I spotted a ewe lambing.

Aila finds the whole process of her Mummy trying to catch a ewe a little frightening especially when it is just her and me out in the field. So to save frightening her I took Aila to the cafe (situated on the campsite which is adjacent to the lambing field) where she sat with her Auntie. 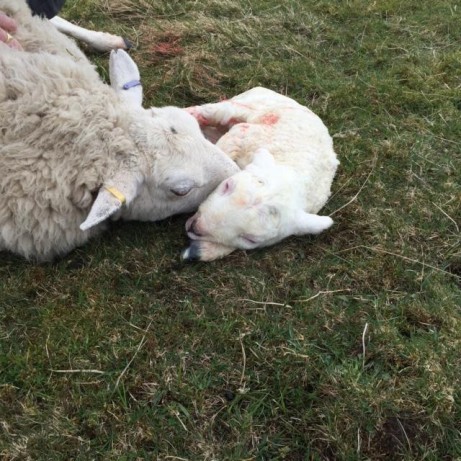 I caught the sheep and discovered that it was a huge lamb that had basically got stuck and was starting to choke. Thankfully, I got it in time and managed to pull the lamb out which after clearing its mouth and giving it a wee rub was alive. The head was very swollen so we decided to take the ewe and lamb into the shed to keep a closer eye on things. Lambs born with swollen heads can struggle to get that first vital drink of milk. Dad took the ewe and lamb in whilst I carried on going round to check the rest of the ewes.  (picture of ewe and lamb with big head)

A ewe was lambing not far from where I lambed the first one, the water bag was just out so I left her to continue on the rest of my round to check her when I got back – in the hope she would manage to lamb herself. I went up the hill and discovered a third ewe lambing. I knew as soon as I saw her that there was problem as all I could see was the lambs nose and no hoofs.

She was a lively ewe, so I called on Dad to help me catch her. I am glad I did as the lamb had both legs back, but unlike the one the previous day the head was already out. I managed to get my hand behind the head and feel for the knee joint, which I hooked with one finger and pulled until I got the foot. It took a little time,  but once I got it, I pulled.  Once again, we were lucky the lamb was alive. We took this ewe and lamb in to the shed, as the ewe seemed a little feisty and we weren’t sure whether she was going to stay with the lamb.

I was heading home,  via the other ewe that was lambing in the hope that she would have lambed. I found her to discover the lamb hanging with only one leg and a head. I caught her and pulled the lamb out, gave it a little rub and the lamb shook his head.

I enjoyed my lunch, and must admit, I ache all over having chased a few sheep round the field then wrestling them to the ground using muscles that haven’t been used for a while. I don’t have the skill of catching sheep down to a fine art, but sheer determination gets me there – I just hope no one is watching as I am sure they would have a good laugh at the spectacle.

Afternoon round was a little quieter, I marked a couple of lambs and lambed one ewe. All was fine with the ewe, everything was coming the right way (head and two legs) so it was an easy delivery and a very good mother. (picture attached)