Lambing 2018 Day 3 – Bringing in the re-inforcements 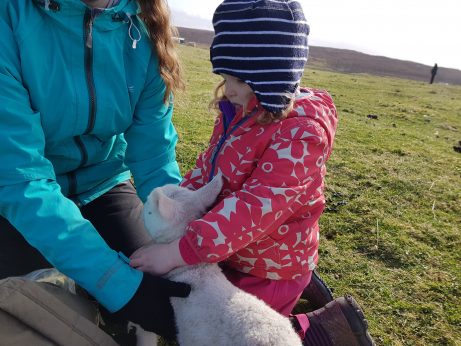 Tilly with her Lamb

The weather for the early morning feed run was  better today. It had rained through the night which can often lead to a wee burst of new lambs, it didn’t happen yesterday so I had high hopes today would be the day. Glen and I headed off on the quad. All the ewes came into feed including a new lamb. It is a bit of a frenzy at feeding time so picking out the mother of the new born lamb was a challenge, however, she was going back and fore to the lamb so I did eventually spot her. I headed up to the top part of the hill and fed the few that are up there. Apart from the lamb that came in to feed there were no other new lambs or anything lambing. I was relieved that all was well and I didn’t have to catch anything but also a bit gutted not to see more new lambs. Also a bit puzzled as Dad had seen a set of twins on his round yesterday evening yet I cant find them!

The morning round was a bit more interesting. We all went out this morning, daughter Tilly, my niece Rhea and Dad.  Dad spotted a ewe lambing, it was just the water bag out and nothing else showing. We thought we would leave her and check the rest of the field. In the distance I spotted a ewe walking round in circles with her head down. On closer inspection the ewe had just lambed, the lamb was healthy and attempting to stand. The ewe was marked for twins, we left her to it in the hope she would manage herself. 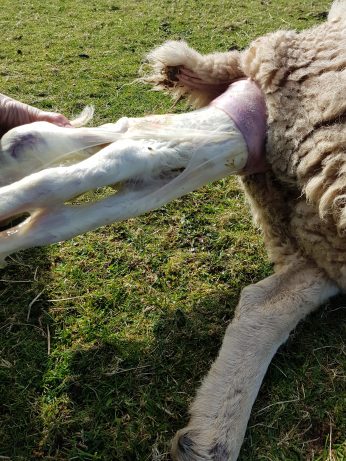 This lamb needed a wee bit of help

We went back to the first ewe lambing and as not much progress had been made, we decided to lamb her. The ewe didn’t look particularly strong so we thought it best to intervene. We caught her without too much running. Everything was coming the right way and I pulled a big, healthy lamb out. The ewe instantly started licking the lamb and by the time we made it back to the quad the lamb was attempting to stand which is great. In hindsight we probably didn’t need to lamb her but sometimes you don’t know until you do! And Tilly witnessed her first lamb been born!

The ewe we left that was marked for twins had lambed herself and all was well.

I headed of into Inverness in the afternoon to pick up eldest daughter Aila and my niece Abbie. Both requested to take some time of school to help Grandpa with lambing. I do believe it is a great education; there are not many opportunities where you can get hands on experience. It is also great to see the enthusiasm and willingness to learn about all things lambing!

We returned to the wild west – literally it is blowing a gale. Dad on his afternoon checked out the set of twins that were born this morning to discover a third lamb in the mix. Dad knew that something wasn’t quite right and reckoned the 3rd lamb was the missing lamb from the set of twins he found last night! They all got a bit mixed up. Him and Rhea took in the ewe and mixed up twin to try and match them all up again! At least the mystery of the missing lamb was solved, well we think it is!