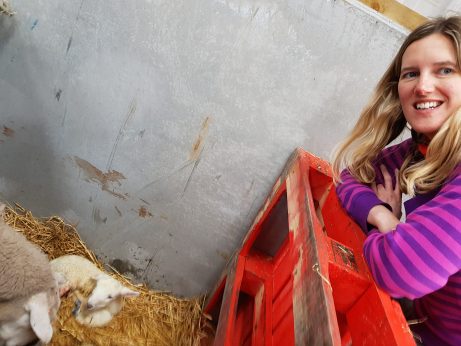 Proud Amber having lambed her lamb

My first morning off, Dad, Abbie and Amber did the early shift. There were three new lambs a set of twins and a single. All were fine and taken out of the big pen and put in individual pens.

We went down a little later Abbie, Aila, Tilly and myself. Aila has a new found braveness and enjoys walking through the pen of ewes to check water levels. Tilly still prefers to observe.

A ewe had been pulled out of the pen earlier which had started lambing. It was expecting twins. We left them for a spell while checking others and filling up water. During this time Rhea spotted another ewe lambing, and it wasn’t just any ewe it was the ewe Alisha picked out. All the Grandchildren had picked out a ewe at the beginning of lambing to have as their own so it causes great excitement. We took Alisha’s ewe out of the big pen, and put her in her own pen.

The ewe lambing with twins had made no progress, we decided to intervene. There were two willing lambers keen to get there hands, kinda, dirty! Abbie was first in and as Dad had done with me, I asked her to tell me what she felt. Abbie very tentatively with a couple fingers put her hand in and felt the 2 hooves and a nose. She tried to pull out the front legs. It can be tricky as the lamb is difficult to grip as it is all slimy. We got the legs out then Abbie pulled the lamb out, all was good. Rhea was the second lambing assistant! I checked the lamb was coming the right way and pulled it forward so Rhea was able to pull the lamb out. The lamb came out. In hindsight we should have left the ewe to lamb the second lamb herself but we are always wiser afterwards! 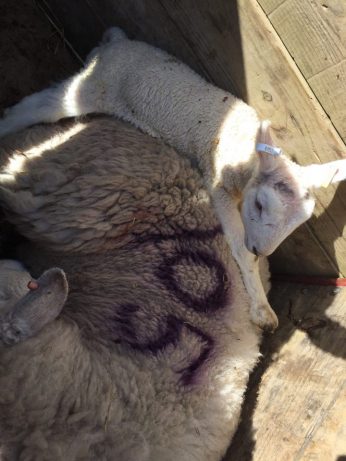 Just chillin’ out with Mum

It was lunch time and with us all in the shed we were creating a bit of disruptive environment to allow Alisha’s ewe get on with it. So we all went off for lunch and Alisha checked her ewe about 45 minutes later and a healthy lamb was born.

The afternoon shift saw another new lamb arrive. We intervened again as the ewe had given up a bit so Amber lambed this one. It was really tight and Amber pulled with all her might and eventually got the lamb out. The lamb was a wee bit slow to come too and needed a bit of encouragement to get up on its feet.

We put 3 ewes out, it was a good day and as lambing pens are limited we decided to put them out. The quad was used and the ewe and lamb were loaded into the trailer and Amber took them out into the field. Anyone who has tried reversing a quad and trailer will know that of all the vehicles to try and reverse with, a quad is the trickiest! I’m not sure quite how long Amber was, attempting, to reverse the trailer to the door. In the end the trailer was taken of the quad and walked to the door!