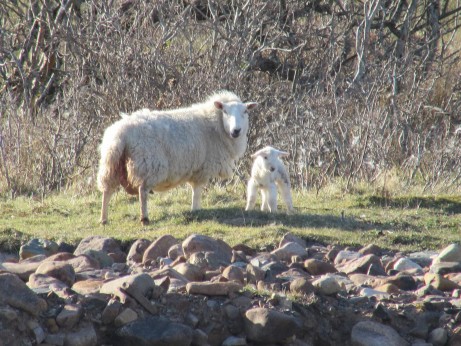 I got back from the wedding Sunday lunch time and I went out with my nieces, nephews and a cousin. It was a pretty horrid day again, wet and windy. We did a quick check round but all seemed fairly settled. We marked one lamb.

On our way home we spotted a ewe my sister had concerns about.  She had noticed that the ewe had a fairly large udder which she thought looked abnormal so took a photo, from the comfort of the heated pick up, to show us. The lamb was looking a little hunched up and not quite as alert as one would like so I decided to catch the ewe to check.

At this point I had my nephew Harry and cousin Katie with me. When a ewe has a lamb they can be easier to catch as they stay with the lamb so you can quietly and slowly get the stick close enough to the ewe to catch her leg without having to run after her. It worked in a fashion. I caught the ewe and got a hold of her back legs, the ewe then proceeded to drag me round, yet another bog, until I managed to get her front leg to get her on the ground. An entertaining sight for Harry and Katie. If I wasn’t laughing myself I may have managed to get the ewe down quicker! Anyway, I got her, and hope that no one else witnessed the catch.

On turning the ewe over I discovered she had mastitis. There was nothing else for it but to take her in to the shed and give her some penicillin to kill the infection. We also gave the lamb a wee top up of milk.

I did go out the following morning with friends who had come across from Forres. Unfortunately it wasn’t the best of days and there was nothing happening. We did mark a lamb and Suzanne mastered the skill of quad bike driving!

They will then go out on the hill and that will be them until September. They will be taken in for the ewes to get clipped in July time.

I am always sad to leave the west, as cliché as it sounds ‘You can take the girl out of the west coast, but you can’t take the west coast out of the girl’. I have always enjoyed lambing and have been going out with Dad for as long as I can remember.

Dad has been a great teacher on the lambing field and has never accepted ‘I can’t do it’. He would always talk us through whatever the scenario was – be it lambing a ewe with a leg back or driving a quad bike through a bog! It certainly has given me the confidence and knowledge to do a lambing. Although, I know Dad is always there if I’m not sure, which often I am, but every day is a school day!