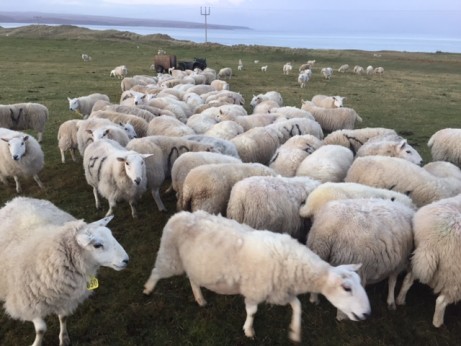 My brother did the early shift this morning. There were a few new lambs and two sets of twins. He had to lamb one and sadly the lamb was dead. No reason, wasn’t a particularly big lamb and everything was coming the right way.

Luckily, having the set of twins, my brother was able to take one of the lambs and and give to the ewe that had delivered the lamb that died. He skinned the dead lamb and put on the twin so the ewe recognised the smell and accepted the lamb
When we went out later we saw a ewe lambing and the lambs head was out – we caught the ewe and pulled the lamb out, it was very tight. Unfortunately the lamb was dead, it most likely choked. It had been dead a while so despite all our efforts we were unable to revive it. We took the ewe in and fostered one of the other twins on to the ewe.

I spotted another ewe lambing, given the outcome of the last ewe I decided to lamb her. Good job, it was very tight and I doubt the ewe would have managed herself.

We noticed a wee lamb that had lost its mother, I caught the lamb and it was quite full so had been fed and thought the best option was to leave the lamb in the hope its mother would eventually find it. It was the morning check so we would be back in the afternoon and could do something then. Often it can cause more harm than good stirring things up and best to leave things quiet and let it sort itself out.

There were two ewes trying to steal a lamb again, both were trying to steel the same lamb. We removed the ewe and lamb from the field to reduce confusion.

The afternoon we marked 14 lambs, the little lamb from earlier had found its mother.

Dad had to lamb a ewe in the evening, it had one leg back, all was fine.