Aila, Dad and I went round as usual in the morning. I was dropped off on the hill part to walk through. Dad had spotted a lamb early morning which looked hungry so we took some milk out to feed it from a bottle. I fed the little lamb and discovered the ewe didn’t seem that interested.

A ewe was lambing at the bottom part of the field so we went to lamb her. It was a big lamb but thankfully the lamb was alive.

We marked a fair few lambs including a couple sets of twins.  Aila learned today how to tell the difference between a ‘girl’ lamb or a ‘boy’ lamb! After the first lamb was marked she was able to tell 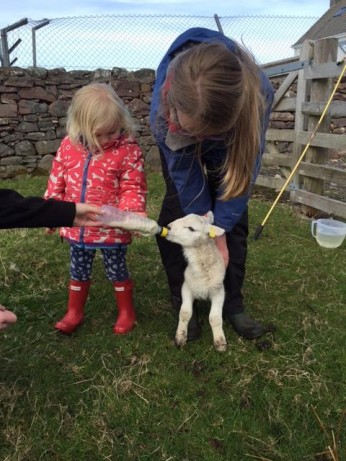 the sex of all lambs. We didn’t, however go into the details on castration! Just that some ‘boy’ lambs need two rubber rings or others (ones which we think may be a good tup (male sheep used for breeding) only need one ring.)

We went to feed the hungry lamb up the hill to discover the lambs mother had mastitis. The ewe would have been in a fair bit of pain (as any mother who has breastfed and suffered from mastitis will know!) We took the ewe and lamb into the fank. We gave the ewe penicillin and we will need to feed the lamb until we find a new mother for it. We decided to call the lamb Daisy.

We took another ewe in which had a bad foot, it needed some penicillin to kill the infection. She has a lamb which is doing really well but it is easier to help make the ewe better if kept in the fank.