Another busy day on the lambing field and it was sunny albeit a little cold too!

It was just Dad and me on the morning round. It was all pretty quiet really, everything looked fairly content. We lambed one ewe, the lamb was coming the right way. It was big though so needed a wee bit effort to get it out. All fine.

Aila was very excited to have her Daddy arrive after lunch and take him out round the lambing field. We also had Amber join us, after hearing from Elaine she was keen to get in on the action! A fair crew of us went out. 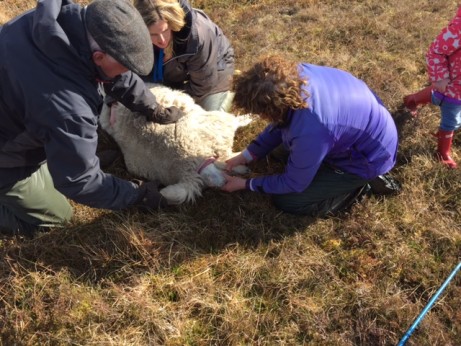 We weren’t in the field long when I spotted a ewe lambing down by the river. We went and caught her, as it was on the river bank it was fairly stoney which is less forgiving than grass when you land on it with force – another bruise to add to the growing collection! Everything was coming the right way so Amber decided to lamb her. It was a big lamb but Amber got the lamb out and when we pulled the lamb round to the mother she immediately started licking it so we all cleared out to let her get on with it! The first ewe Amber has ever lambed – she was delighted!

We went to mark the mornings lamb while Dad went up the hill to check the ewes and lambs. We got a whistle not long after from Dad telling us that the was another ewe lambing up the hill. We all went up. I caught the ewe, thankfully this time in a bog – a softer landing! We pulled her on to some dry grass to lamb her. It was a huge lamb and the head had started to swell up. When we caught the ewe the lambs nose was out and the tongue was hanging out its mouth and it was blue – not a good sign. We got the lamb out, again a fair amount of effort needed. The lamb came out and was breathing – a quick swing to make sure it’s airways where clear and we were good to go. As the head and the tongue were swollen Dad decided to take the ewe and lamb in to the she’d just to ensure the lamb got that first vital drink of milk.

On our way out I spotted another ewe lambing, the water bag was out. We decided to take the ewe and lamb in then come back out to check the ewe lambing.

On returning to the field we caught the ewe. Good job we did, the lamb had one leg back and the lamb was stuck. All three of us, Amber, Dad and I, had a go at getting this lamb out, it was a really struggle. Dad eventually got it out but as he did there was a crack. The lamb was out and appeared to be breathing, phew, but when we pulled the lamb round to its mother it stopped breathing. We tried everything. It kept on taking a gasp of air then would stop. We swung it, massaged its heart, I even attempted mouth to mouth but the lamb had gone. Gutted. There was nothing obvious why the lamb didn’t survive. You then start to question whether if we lambed her when we first saw her we might have saved the lamb – we don’t know.

We took her in to the shed to twin on Daisy. The last ewe we twinned Daisy on to didn’t really accept her, so hopefully this one will.

We were running well and truly late to head across to Sheildaig for a wedding tomorrow!