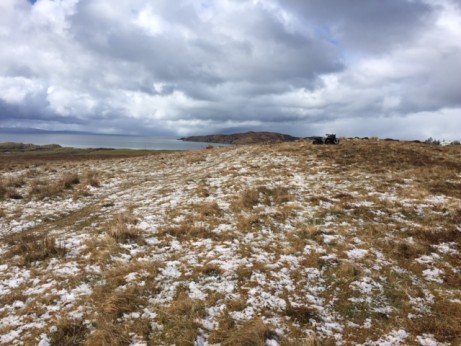 I woke this morning and the ground was white! It was a like a winter’s morning not spring!

My brother did the morning shift again, there were three new lambs.

I went out later, everything seemed fairly quiet.  I was gutted to come across a dead lamb which we marked yesterday.  The poor wee lamb didn’t get a drink of milk and combined with the cold weather it didn’t survive. I should have noticed yesterday but I didn’t so I was feeling pretty low.

On my return I spotted a lamb that wasn’t marked. I casually jumped of the bike thinking it looked a easy lamb to catch. I grabbed my stick, not thinking I would need it. The lamb took off, I sent Glen (the dog) out to get in front of the wee lamb which he did. He lay down just in front of it which tends to be enough to stop a ewe – not this lamb. The lamb kept going and jumped over the dog! I thought I had no hope of catching it. After a fair bit of running over the hill, through the bogs and up and down I eventually got it – I managed to ditch a few layers of clothing after that!

Elaine came out in the afternoon as did Dad. We went to catch the mother of the dead lamb I found this morning. She was another tricky one to catch. I eventually caught up with her in another bog! I caught her by her wool so had to quickly get a better grip of her before I lost her. From a distance and as described by Elaine it looked as if I elegantly “belly flopped” on top of her! I think in reality it wasn’t quite so brutal!

A bittersweet end to the day, Dad skinned the dead lamb and put the dead lamb’s skinned fleece on to Daisy to foster her on to the ewe. Although Daisy was still with her mother in the fank she was  sadly unable to look after her as she has no milk. She was a protective mother and will be missing Daisy. As cruel as it sounds, Daisy will be far better off with a new mother who has milk on tap when needed and in a couple of days will be able to go back out to the field with the rest of the flock, if the ewe accepts her. A happy ending for the ewe that lost her lamb hopefully.